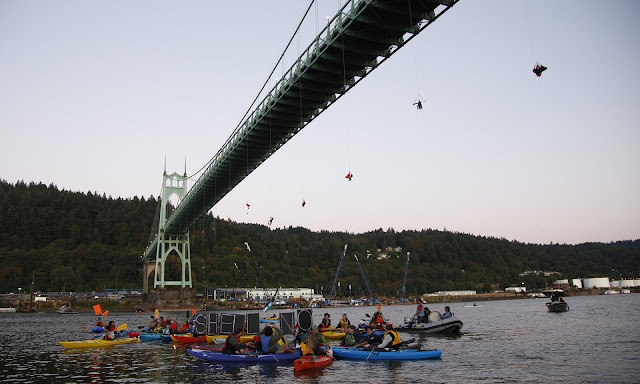 http://www.theguardian.com/environment/2015/jul/29/activists-hang-from-bridge-portland-block-shells-arctic-oil-vessel
A group of environmental activists rappelled off a bridge in Portland, Oregon, shortly before 3am PT, in a bid to block a key vessel in Shell’s Arctic drilling fleet leaving the city’s port. 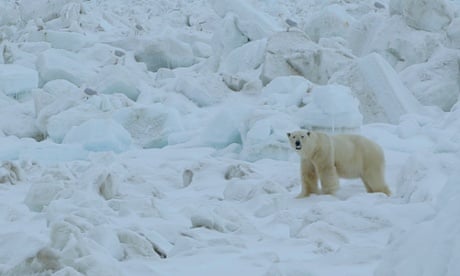 Read more
The oil company’s 380ft Fennica icebreaker departure time has been delayed, but it is not yet clear what role, if any, the protesters played in the delay. The vessel was originally scheduled to leave at 4.45am, according to the Columbia River Pilots website. The Columbia River Bar Pilots website later listed the launch time as 12pm. No new departure time has been listed on either site.
A Shell spokeswoman said: “The Fennica will begin its return journey to Alaska once we’ve completed the final preparations.”
Greenpeace said that 13 of its climbers were hanging off St Johns bridge and had enough supplies to last days in their attempt to hinder Shell’s Arctic drilling plans, with another 13 people assisting them.
The vessel arrived in a dry dock in the city for repairs on Saturday, following damage to its hull in the Aleutian Islands earlier this month.
The icebreaker must be at Shell’s drill site before workers can drill deep enough for oil because it has a capping stack, a key piece of safety equipment, on board. A capping stack is required because it can stop oil leaks if a well blows out.
Annie Leonard, executive director of Greenpeace US, said: “Every second we stop Shell counts. The brave climbers here in Portland are now what stand between Shell and Arctic oil. This is President Obama’s last chance to wake up and realize the disaster that could happen on his watch.”
Sergeant Peter Simpson, a Portland police spokesman, told the Guardian that arrests may take place later today: “We are aware of the demonstration and are monitoring it in the area. The St Johns bridge remains open to all vehicle traffic. Arrests may be possible as the day goes on. Our top priority is public safety, including that of the demonstrators and other people using the river.”
The US coast guard was reported as monitoring the situation. Onlookers said the activists were handing out diapers to one another because they could be on the river for a long time.
Other protesters have taken to the water in kayaks to attempt to block the vessel from leaving Portland. They met at noon on Tuesday in North Portland’s Cathedral Park before taking to the water. Local media reported that about 60 kayaks were in the water early on Wednesday morning. The action is similar to one that took place in Seattle last month in an attempt to stop Shell’s rig, but failed after the so-called kayaktivists were pulled out of the way by the coast guard.
“Our goal is to basically demonstrate as much community resistance to Shell’s plans to drill for oil and secure new oil reserves in the Arctic,” Meredith Cocks, of local green group Portland Rising Tide, told Reuters.
Last week the Obama administration granted Shell permission to bore two new exploratory wells, subject to conditions.
Leonard added: “Greenpeace prioritises safety above all else and rappelling from a bridge is a walk in the park compared to the risks that we’ll face if we continue the climate change trajectory we’re on now.”
Posted by Mary at 2:25 AM