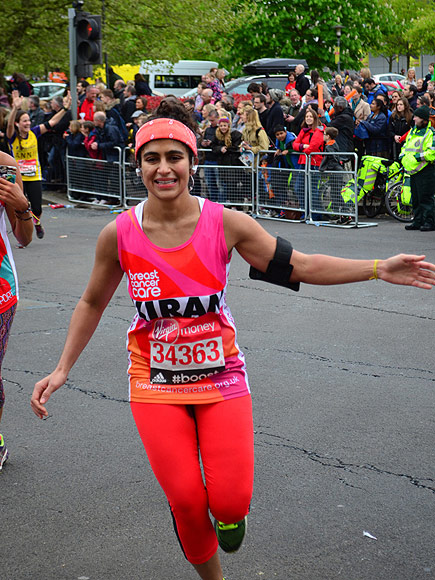 Kiran Gandhi
COURTESY KIRAN GANDHI
BY CHAR ADAMS
@CiCiAdams_
08/07/2015 AT 03:15 PM EDT
Kiran Gandhi, who has played drums for singer M.I.A. and Thievery Corporation, decided to run the London Marathon without a tampon. Gandhi let her blood flow freely to raise awareness about women who have no access to feminine products and to encourage women to not be embarrassed about their periods. "I ran the whole marathon with my period blood running down my legs," the 26-year-old wrote of the April race on her website. Gandhi, a Harvard Business School graduate, wrote that she got her period the night before the big race and thought that a tampon would be uncomfortable while she ran. But that isn't the only reason she decided to let it flow. "I ran with blood dripping down my legs for sisters who don't have access to tampons and sisters who, despite cramping and pain, hide it away and pretend like it doesn't exist." She added: "I ran to say, it does exist, and we overcome it every day." 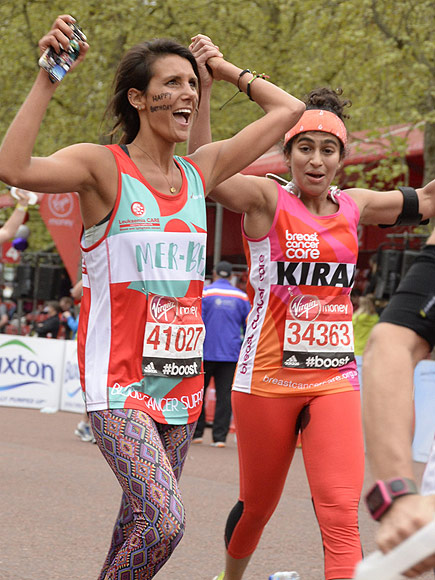 Kiran Gandhi (right)
COURTESY KIRAN GANDHI
Clad in all pink for breast cancer awareness, the 26-year-old finished the race in four hours, 49 minutes and 11 seconds. She told Cosmopolitan that she ran through the pain of cramps and the anxiety of the race (which she had spent a year preparing for) and felt empowered as she did so. "I felt kind of like, Yeah! F--- you!," she said. "I felt very empowered by that. I did." 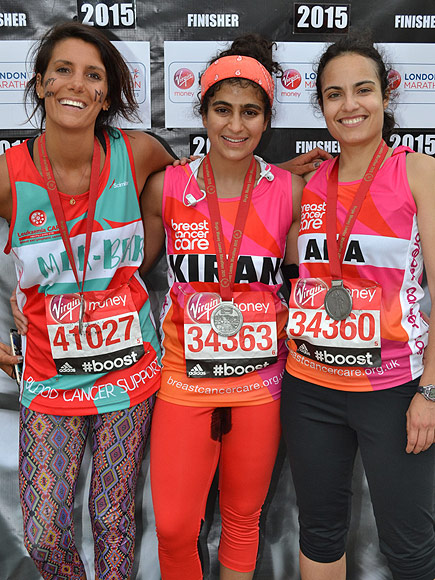 Kiran Gandhi (center) and fellow runners
COURTESY KIRAN GANDHI
After the race, she took photos with her family and friends, wearing her period-stained running pants proudly. Gandhi tells PEOPLE that she decided to run without a tampon to highlight the sentiment of period-shaming and the language surrounding women's menstrual cycles. She wrote on her site that "on the marathon course, sexism can be beaten." 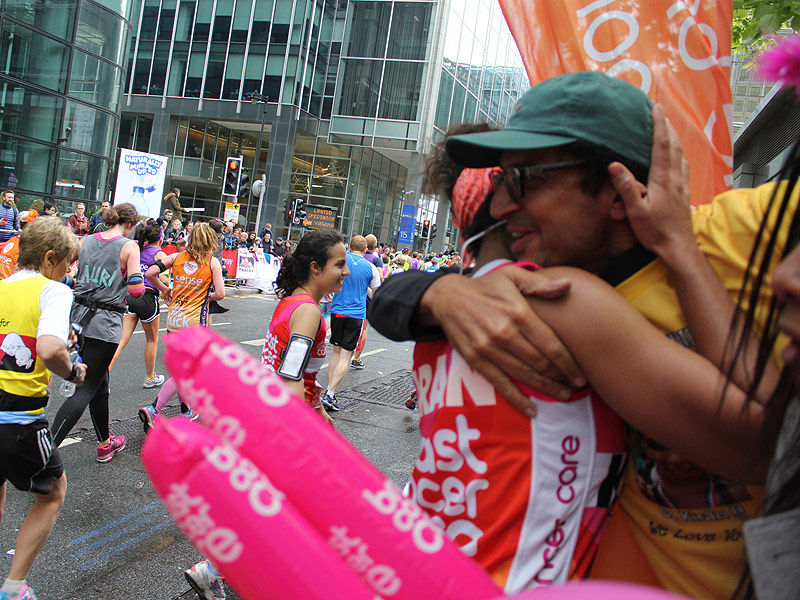 Kiran Gandhi
COURTESY KIRAN GANDHI
"If there's one way to transcend oppression, it's to run a marathon in whatever way you want," she wrote. "Where the stigma of a woman's period is irrelevant, and we can re-write the rules as we choose."
Posted by Mary at 5:04 AM