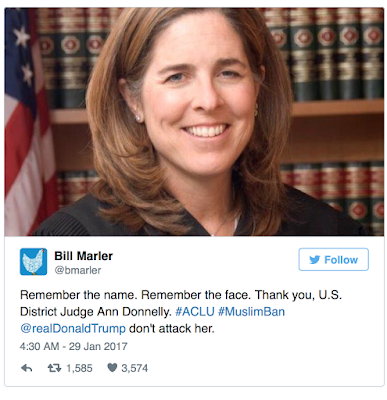 Ann M. Donnelly waited half a year for her chance to convince the Senate that she would make a good federal judge. When the day finally came, she packed as many relatives as she could into the benches.

Play Video1:26
ACLU attorney Lee Gelernt announces to a crowd outside a Brooklyn courthouse that a federal judge had stayed deportations nationwide of those detained on entry to the United States following an executive order from President Trump that targeted citizens from seven predominantly Muslim countries. (ACLU Nationwide/Facebook)
By early Sunday morning, tearful and exhausted people were emerging from security areas across the United States. They had no guarantee for their future in the United States, but they had a reprieve from immediate deportation.
And as families filtered out into the cities, the name of a federal judge they’d never heard of was in headlines across the globe.
An earlier version of this post referred incorrectly to the “federal circuit.” Donnelly is a federal judge for the Eastern District of New York.
Posted by Mary at 1:19 AM