The Art of the Protest 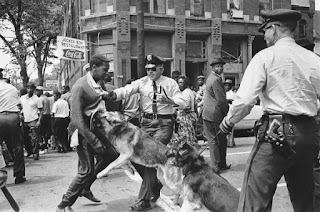 Poland has one of the strictest abortion laws in Europe. Recently, a government-backed bill sought to go further, punishing women who had abortions with up to five years in prison. Last month, Polish women responded with a one-day strike. On Oct. 3, tens of thousands of people, most of them women dressed in black, protested in major cities.
Poland is run by a nationalist, right-wing Roman Catholic party that controls Parliament, has taken over independent media, is disregarding rulings of the Constitutional Court and now proposes creating a militia outside the command of the armed forces.
It would not seem to be a government that would listen to such a protest. But three days later, its legislators voted down the abortion bill. Why? The government saw the size and speed of the mobilization, and its high concentration of young people, as a threat — one it worried could grow.
The current relevance of this to America, which enshrines in its Constitution the right to peacefully voice protest to check government power, will escape no one. The Republican Party will soon control the presidency, Congress, most governorships and state legislatures; in all probability, there will be a conservative majority on the Supreme Court. Given Donald J. Trump’s approval of advisers from the white nationalist far right, following his vitriolic attacks on the policies of the Obama administration, Democrats, independents and even some Republicans are bracing for assaults on — everything.
Yet they are not powerless. Seldom, in fact, has an out-of-power opposition been able to count on more resources — in broad support, political clout and moral authority.
But how these resources are used is what matters.
If the purpose is to allow despondent or angry people to vent and show solidarity, then the anti-Trump protests going on in major cities already do that. But they will not reverse the election results, or alter what President-elect Trump seeks to do.
Protests can change policies, however — and often have. In other countries and throughout American history, ordinary citizens banding together have triumphed over governments, even when a single party holds sweeping control. Many of those protests used resources that the opposition to President-elect Trump enjoys today. They can learn from how those victories were won.
Plan, plan, plan. A half-century after the street struggles in Birmingham, no American movement has yet surpassed the strategic mastery of the civil rights movement. Civil rights leaders were fighting a war — nonviolently, but a war nevertheless — and they planned it as such. They mapped out protests to create escalating drama and pressure. They ran training schools for activists, teaching them how to ignore provocations to violence, among other lessons.
Provoke your opponent, if necessary. The turning point for civil rights came when the Southern Christian Leadership Conference allowed children to march in Birmingham (a decision criticized by many, including Malcolm X). Bull Connor, the city’s commissioner of public safety, ordered the police to turn attack dogs, nightsticks and fire hoses on children marching peacefully — some of them 6 years old. The scenes made the nightly news and the front page of newspapers around the country.
The movement won by making a strong moral appeal to public opinion. It showed protesters making sacrifices for their cause. It lured opponents into violence that finally swayed the views of whites — a tactic similar to the playbook of Mahatma Gandhi in India, of forcing an oppressor to show his ugliest face. When that sight tips public opinion, government often listens. 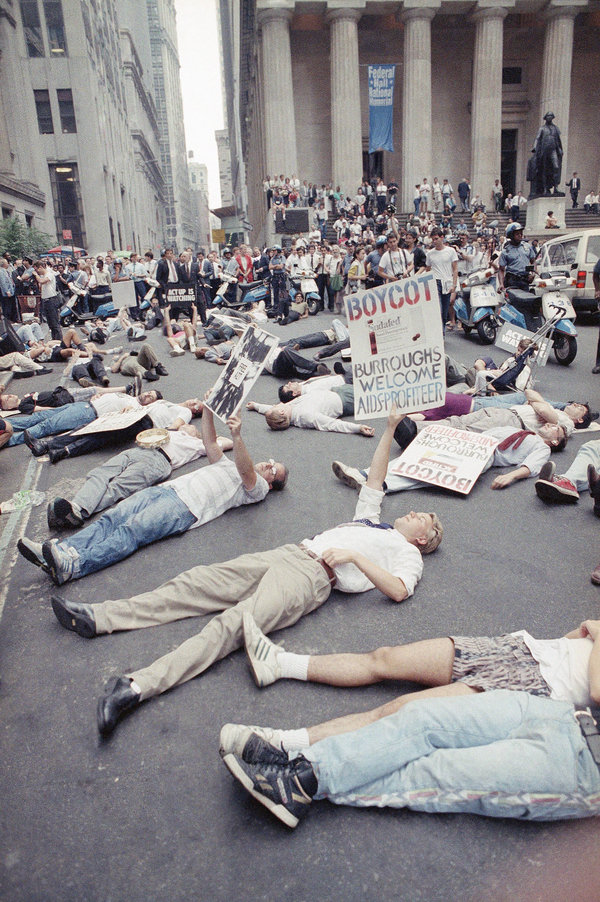 Protestors organized by ACT UP on the street in front of the New York Stock Exchange in 1989.
TIM CLARY / ASSOCIATED PRESS
Think national, act local. Protests are most effective when they aim for an achievable goal in one location, knowing that the real battle is for national public opinion. Movements work on two distinct levels, Mark and Paul Engler wrote in their important analysis of nonviolent strategy, This Is an Uprising. On a local level, the civil rights movement often failed; for example, the concessions won by the Birmingham protesters were vague and modest. But it was Birmingham that finally gave momentum to the passage of federal civil rights legislation.
Use humor. In Serbia, the Otpor movement mobilized the country against the dictator Slobodan Milosevic by using pranks to cut through fear. Its daily fare consisted of street actions that painted Milosevic as absurd: When the tyrant dedicated a new bridge, Otpor built one out of Styrofoam and held its own ceremony.
Srdja Popovic, an Otpor leader, calls this “laughtivism.” (Here is a Fixes column about his strategies.) It does more than counter fear. Humor breaks down defenses, creating an openness that allows people to consider your argument. “If the joke is good, even the police get it,” said Ivan Marovic, another Otpor leader.
When appropriate, be confrontational. It is hard to imagine how marginalized people with AIDS were during the Reagan administration — and how hopeless their cause, both medically and politically.
No group more proudly claimed the title of “outsider” than Act Up, the AIDS Coalition to Unleash Power, founded in March 1987 in New York. Many of its members were dying. They were despised and reviled.
The Englers call Act Up an example of the power of the extreme outsider strategy: change through confrontation. It was noisy and angry. It was the first group ever to close down the New York Stock Exchange. Members scattered the ashes of loved ones on the White House lawn. They held a “Stop the Church” demonstration in front of St. Patrick’s Cathedral.
Act Up’s polarizing language, actions and style put off even some influential gay men, who told the group it was hurting the cause. (The Rev. Dr. Martin Luther King Jr. had heard the same criticisms.) But even many who were repelled by Act Up’s approach still heard its message.

Although people condemn your tactics, they can still support your issue, the Englers wrote.
By pulling from one extreme, Act Up shifted broad public opinion. The group started a global AIDS activist movement. It played a major role in changing the rules to expedite new AIDS medicines — and then it helped to bring down their cost. It forced insurance companies to cover treatment. It procured a patient voice in treatment. It was a major force behind the Ryan White CARE Act, a federal program for uninsured and underinsured people with AIDS.
Pull out the pillars. Gene Sharp, an American academic who is the guru of strategic nonviolence, argues that every leader, no matter his power, relies on obedience. Without the consent of the governed, power disappears. The goal of a civic movement should be to withdraw consent. Pull out the pillars, and the whole structure falls.
Senior citizens and his police were two of Milosevic’s most important pillars. Otpor members worked on both whenever they were arrested (which was quite often). Grandparents got angry when high-school students were repeatedly arrested or accused of terrorism.
And every arrest presented a chance to talk to the police. At the barricades, Otpor led cheers for the police. Over time, the police got to know the students they kept arresting, and some came to admire the youths’ commitment to nonviolence. “Police officers would complain to us about their salaries,” said Slobodan Homen, an Otpor leader. He offered some advice for Milosevic: “If later you order these people to shoot us — well, don’t count on it.”
This strategy also works for policy change. Advocates for gay marriage won early victories among many churches, the American Bar Association and child development experts. This helped transform influential opponents of gay marriage into influential allies.
The most important pillar on policy matters is Congress: Presidents need to pass their bills. Both Bill Clinton and George W. Bush failed to pass signal legislative priorities, despite controlling Congress. This was not because of grass-roots activism, but because of lobbying and spending by powerful and wealthy groups.
Under Mr. Clinton, health care reform fell victim to, among other things, “Harry and Louise” ads featuring a fictional couple, financed by the health insurance industry.
Mr. Bush’s top priority in 2005, when he had just won re-election and control of Congress, was to allow people to invest their Social Security contributions in private accounts. It was the focus of his State of the Union speech and town meetings he attended around the country. Yet he could not get it through Congress. “The simplest explanation is that President Bush overestimated the amount of political capital he had banked,” wrote William A. Galston of the Brookings Institution. “After all, he had prevailed by the smallest popular vote margin of any president re-elected in the 20th century. And there was evidence that the campaign’s bitter, divisive tone had taken its toll. As President Bush’s second term began, he enjoyed the lowest approval rating — just 50 percent — of any just-re-elected president since modern polling began.”
Exploit galvanizing events. During the 1970s, the United States built nuclear power plants. Lots of them. The first major protests came from the Clamshell Alliance, formed in 1976 to oppose the construction of the Seabrook Station plant in New Hampshire.
The Clamshell Alliance failed to stop Seabrook’s construction, but it gave rise to a grass-roots antinuclear movement. Groups around the country staged protests and sit-ins that slowed the pace of new reactor construction.
Then on March 28, 1979, Reactor Number 2 at the Three Mile Island station lost coolant and suffered a partial meltdown. The nuclear reactor industry never recovered.
Three Mile Island came 13 years after another partial meltdown, at the Fermi 1 reactor outside Detroit. Haven’t heard of it? One reason is that at the time, there was no movement ready to respond.
Events that galvanize public attention occur frequently. Most lead to nothing. But a few become sparks for sweeping change. What makes the difference is the existence of a prepared movement.
Thankfully, a galvanizing event need not be a nuclear meltdown. It does need to be an attention-grabbing drama where one side holds the moral advantage. When activists don’t have one, they have sometimes created one: think Bull Connor’s dogs, or Gandhi’s Salt March.
President-elect Trump has no popular mandate (Hillary Clinton won the popular vote by a margin larger than John F. Kennedy in 1960, Richard M. Nixon in 1968, or Al Gore in 2000). Even many who voted for him do not endorse some of what he advocates or represents. Many traditional pillars of Republican administrations are less than firm in their support, beginning with the wary Republicans in Congress — and some are starting out opposed, notably much of the foreign policy establishment. The president-elect, as Mrs. Clinton said, can be “provoked by a tweet.” He is impulsive. His campaign set a new standard for what Galston called a “bitter, divisive tone.” He and his advisers hold bigoted views that overwhelming majorities of the American people reject as immoral.
What terrifies many people about a President Trump, in other words, is also what makes, for civil resistance, a uniquely promising moment.
Posted by Mary at 11:51 PM