D.C. punks are reviving an ‘80s-era protest message to signal their dislike of the president-elect.
KRISTON CAPPS 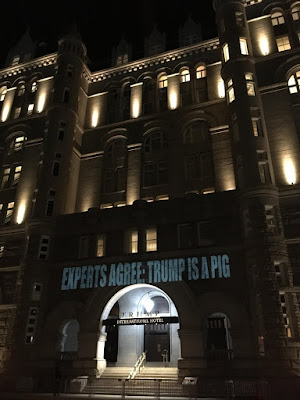 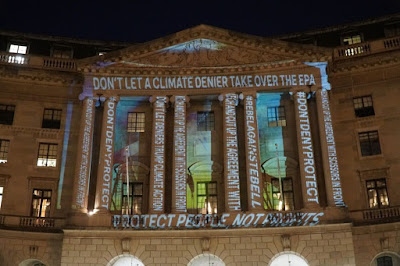 Robin Bell didn’t show up at U.S. Environmental Protection Agency headquarters with anything specific he wanted to say about the Trump International Hotel. He was on hand at the invitation of the Sierra Club and 350.org to help protest the appointment of Myron Ebell to President-elect Donald Trump’s transition team.
Ebell is a climate-change denier, as Bell—an artist who specializes in projections—spelled out in giant letters of light over the EPA building. But after an hour of protesting Ebell, the artist couldn’t resist taking a shot at the man who appointed him.
“While we were doing it, behind us is the Trump Hotel. I thought, ‘Maybe we should do something,’” Bell says. “I just literally mocked that up on the spot, turned the projector around, and just hit it.”
So for five minutes on Monday night, the façade of the Trump International Hotel was lit up with a basically legal, homegrown, historic protest.

Using Photoshop and his projection-mapping software, Bell whipped up something on the fly. The choice was obvious. “Experts Agree: Trump Is a Pig” might not register as the same zinger outside the District, but for the city’s punk scene, it’s something of a rallying cry.
That phrase has been popping up all over town over the last few weeks—and not just because Americans so recently elected to send a leader here who has bragged about sexually assaulting women. The message is a callback to a popular drag on U.S. Attorney General Edwin Meese during the Reagan era. At the time, the D.C. hardcore music scene was at its zenith, while D.C. itself was stuck in its nadir. “Experts Agree! Ed Meese Is a Pig” posters were everywhere.
“The capital’s newest fashion craze: Ed Meese T-shirts,” reads a 1988 story in The New York Times, which quotes a bookseller who says that he sold 50 shirts in 2 hours.
Jeff Nelson, a founder of Dischord Records and the drummer for Minor Threat, launched the popular protest against Meese in the 1980s. Hundreds of posters were pasted across the city protesting Meese’s role in the Iran-Contra scandal and the Reagan administration’s treatment of AIDS patients. Washingtonianeditor Michael Schaffer, writing for The New Republic in 2013, described Nelson’s “Meese Is a Pig” campaign as a “pre-web meme,” one that eventually sold some 6,000 T-shirts.
Jason Mogavero, a performer in the always topical electropunk band Jack on Fire, may be responsible for reviving the slogan. Mogavero started printing “Experts Agree! Trump Is a Pig” posters and stickers in October, plastering them all over D.C.’s Shaw, Bloomingdale, and LeDroit Park neighborhoods. They’ve since spread further.
“It got used in a flyer for a punk show in Richmond, a benefit for an organization promoting abortion access and access to women’s healthcare,” Mogavero says. “With the projection, it’s gotten a bit more of a signal boost than it had before.”
Bell—who earned notoriety last year when he began projecting poop emojis and other visuals onto the side of a Subway restaurant that he didn’t want to open in his Mount Pleasant neighborhood—is something of a D.C. punk historian. He recently released a documentary about Positive Force, an activist collective that emerged from the D.C. punk scene in the 1980s and is still active today.
Bell is also an activist, and he spent the summer traveling around the Midwest with the 1 in 3 Campaign, a group working to secure women’s rights to abortion and reproductive health care. With 1 and 3, Bell projected images on buildings and landmarks in in Texas, Tennessee, Indiana, Ohio, and West Virginia. “I have a feeling that we’re going to be pretty busy, fighting all the different positions that Trump has taken and who he might appoint,” Bell says. “We’re not stopping.”
Projection-as-protest is a format that echoes historically in the District. In 1989—in a story that is now D.C. lore—the director of the (now-defunct) Corcoran Gallery of Art canceled a show of photography by Robert Mapplethorpe in the face of threats from then–Senator Jesse Helms. Artists were furious: More than 900 people showed up to protest the Corcoran’s decision. Rockne Krebs, a D.C. artist known for using lasers in his art installations, projected images from the show onto the side of the Corcoran building for all to see.
The stakes are much higher today. The unprecedented nature of Trump’s presidency has D.C. residents worried and D.C. Mayor Muriel Bowser pledging to protect undocumented families from immigration raids or worse.
D.C.’s punk scene is ready to be mobilized. A new generation of hardcore bands is ready to answer the call, as The Washington Post’s Chris Richards has documented at length; the scene hasn’t sounded this explosive since hardcore songs were all about Reagan. Mogavero says that there isn’t a center to D.C.’s musical genres anymore, but adds that “the whole scene is of one mind ideologically.” And the protests are only just starting.
“There’s more fun and mayhem in the wings for sure,” Mogavero says.
Posted by Mary at 11:40 PM