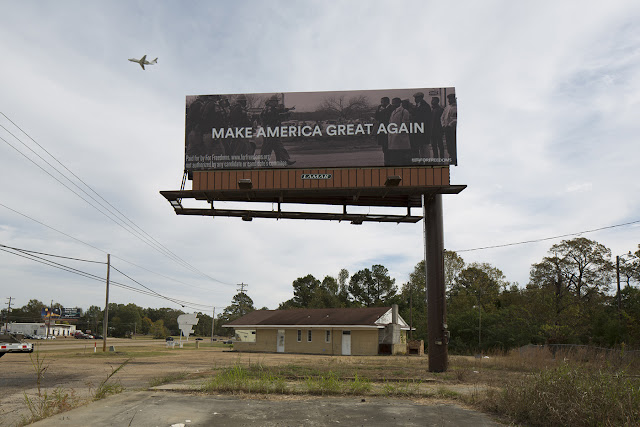 by Hrag Vartanian
The For Freedoms artist-led super PAC is riling people in Mississippi with a billboard that combines Donald Trump’s campaign slogan with a Civil Rights-era photo.
The artist-led For Freedoms super PAC has erected a billboard on Highway 80 outside Pearl, Mississippi that features President-Elect Donald J. Trump’s slogan “Make American Great Again” atop a well-known Civil Rights-era photograph by Spider Martin of a confrontation on the Edmund Pettus Bridge in Selma, Alabama.
Reactions from locals have been strong and area news station WDAM concluded: “If their mission was to stimulate conversation in a state with a racial history like Mississippi, they have and some of that conversation is angry.”
WMCActionNews reached out to Mississippi Governor Phil Bryant, who called the billboard reprehensible. “It’s disappointing that this group would use this image as an attempt to divide the country,” he told the news station.
Hyperallergic spoke to Eric Gottesman of For Freedoms to understand the group’s choice of image and location. He explained:

As part of a billboard campaign initiated by For Freedoms in October, we placed billboards in Pearl, Mississippi, and several other sites around the country. Our hope was to spark dialogue about our collective civic responsibility to push for freedom and justice today, as those before us pushed for freedom and justice in their time through peaceful protest and political participation.
Interestingly, Pearl became a town in 1968 after its citizens voted to incorporate. The billboards in Pearl at that time encouraged citizens to vote for incorporation with the slogan ‘Think about it …’. We can’t imagine a better slogan for how we want people to react to our billboards.
We hope all who see our billboards think about them, talk about them, protest them, and let us and each other know their feelings. Only this will lead to a greater America.

Pearl Mayor Brad Rogers spoke with Marty Elrod, the general manager of Lamar advertising, which controls the ad space, and told WDAM that they agreed to take it down early next week.
Posted by Mary at 5:42 AM