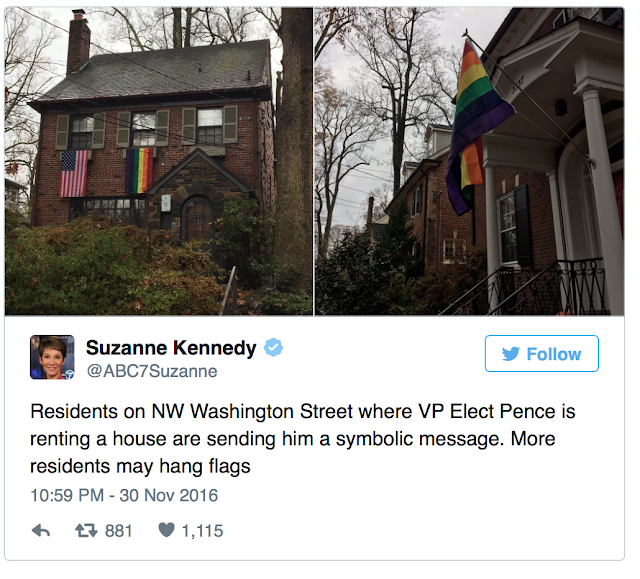 http://wjla.com/news/local/rainbow-flags-pop-up-in-vp-elect-pences-temporary-northwest-dc-neighborhood
WASHINGTON (ABC7) — Christmas decorations are popping up left and right, but one street in NW Washington has a different kind of decoration this season—rainbow flags.
“A respectful message showing, in my case, my disagreement with some of his thinking,” said Ilse Heintzen.
The ‘he’ Heintzen is referring to is Vice-President Elect Mike Pence. Pence moved into a house on Heintzen’s block where he will stay on-and-off until he moves into the Vice-President’s mansion on the grounds of the Naval Observatory next year.
Neighbors started hanging the pride flags after the VP-Elect moved in because the LGBTQ community has criticized Pence’s policies regarding LGBTQ rights.
Heintzen has gay and lesbian friends, so when one neighbor suggested ordering a pride flag, she and others asked for their own.
“I have no idea what [the Vice-President Elect] will think about, but I hope he will change his mind.”
There are roughly a half-dozen pride flags hanging on the block, and more are on the way.
“This is one way that I can show my disagreement,” said Heintzen.
ABC7 reached out to the transition team’s public relations people to get a comment from the VP-Elect, but so far we have not heard back.
Posted by Mary at 1:05 AM