Energy Transfer Partners was not too happy this morning when some Texas water protectors built a pipeline in their office hallway. 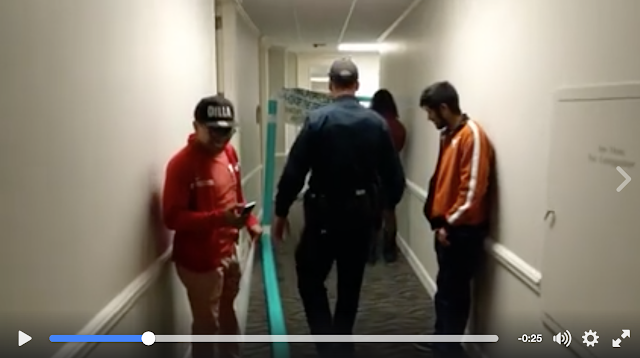 Energy Transfer Partners was not too happy this morning when some Texas water protectors built a pipeline in their office hallway. They wanted it dismantled and taken away for some reason. Imagine that...
The pipeline was for the ETP VP of Government Affairs, Grant Ruckel. It reads, "Grant, you can still choose to stand on the side that supports life or you can continue to reap the heavy consequences of supporting an industrial complex of death and destruction. Future generations, especially your childrens, may still one day look back and thank you for having the courage to join the side that supports life. You have a chioce."
ATXEJ Texas Water Protectors contend that the locally-based VP of Government Affairs for ETP, Grant Ruckel, holds considerable responsibility for disrespecting and violating human rights, Indigenous Rights, and governmental processes during the construction of the Dakota Access Pipeline, Trans Pecos Pipeline, and Comanche Trails Pipeline. Documented failures include:
1. Failing to respect the sovereignty and treaty rights of the Standing Rock Sioux Nation: http://www.truth-out.org/…/38399-terra-nullius-and-the-hist…
2. Disregarding the Army Corps of Engineers, Department of Justice and Department of Interior joint statement requesting a halt of construction for 20 miles east or west of the Lake Oahe / Missouri River crossing: https://www.justice.gov/…/joint-statement-department-justic…
3. Ignoring a second request from the Army Corps of Engineers for a 30-day halt in construction: http://indiancountrytodaymedianetwork.com/…/dapl-ignores-2n…
4. Hiring security forces not licensed to operate in the State of North Dakota, that maced and let dogs bite protesters, including a pregnant woman: https://www.democracynow.org/…/standing_rock_special_unlice…
5. Bulldozing through sacred and archaeologically significant sites, in both Texas and North Dakota, while they were under governmental review for special protection:
https://therivardreport.com/bulldozing-the-last-texas-fron…/
http://www.ecowatch.com/sacred-sites-standing-rock-21034686…
6. Disregarding the requirements of the El Paso County Water Improvement District No. 1, leading to the collapse of an irrigation canal during Comanche Trail Pipeline construction and significant economic hardship to area cotton farmers. Not to mention, suing the water district in eminent domain court to forcefully take the lands to drill unter their canals --- for a pipeline that is "one of more than 20 projects planned to export U.S. natural gas to Mexico... [which] will produce a supply excess of up to 56 times Mexico’s predicted capacity, making the only rational goal to pump it into global markets." citation: https://therivardreport.com/bulldozing-the-last-texas-fron…/)
http://www.elpasotimes.com/…/comanche-trail-pipel…/92742924/
http://www.elpasotimes.com/…/irrigation-canal-col…/90809174/
Another less documented, but highly likely ethical failure is (ETP VP of Government Affairs) Grant Ruckel's direct encouragement of Morton County and the State of North Dakota's backing of shamefully violent and war-like behavior by so-called "officers of the peace".
#NoDAPL, #NoTPPL, #NoCTPL, #NoBayouBridge #WaterIsLife #TxWaterProtectors
Posted by Mary at 2:21 AM