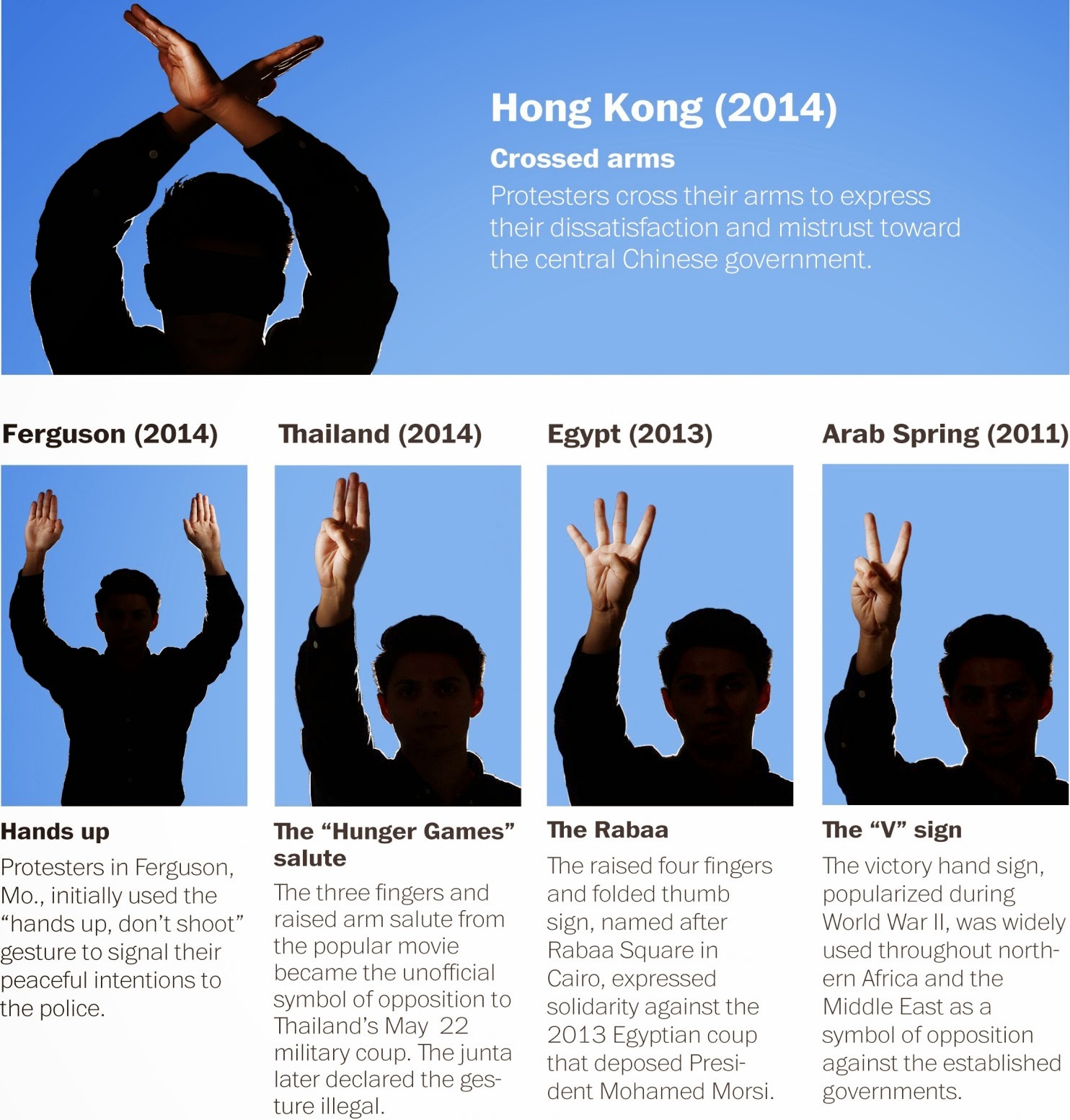 When pro-democracy protesters took to the streets of Hong Kong on China's National Day this week, many silently turned their backs as the Chinese flag and the Hong Kong flag were raised. As they did so, they made a symbol with their hands – a simple cross, held above their heads.

Student pro-democracy group Scholarism organizer Joshua Wong (C) makes a gesture at the Flag Raising Ceremony at Golden Bauhinia Square on October 1, 2014 in Hong Kong. (Photo by Anthony Kwan/Getty Images)
These crossed arms, like the umbrellas that earned the movement the nickname the "Umbrella Revolution," seem to be special feature of Hong Kong's protests, but they follow a familiar pattern. In recent protests as far-apart as Missouri and Bangkok, protesters have used gestures to signal both their defiance of authority and their unity with other protesters.
In the Ferguson protests that erupted over the Summer, for example, many Americans threw their hands up directly above their heads – "Hands up, don't shoot" they would cry, a reference to witness reports that said teenager Michael Brown appeared to be surrendering before he was shot dead by a police officer. (Protesters in Hong Kong have also been seen adopting a similar pose, though whether this is happenstance or mimicry is a matter of debate.)
Other examples abound. In Thai protests earlier this year, protesters copied a three-fingered salute used in hugely popular dystopian book film "Hunger Games" to defy a tyrannical government.
And in the Arab Spring, many protesters used the more familiar two-finger "peace sign," first used to represent victory during World War II and later used by anti-war activists. Later, some in Egypt began to use a four-finger sign, known as the Rabia sign, to protest against Abdel Fatah al-Sissi's ouster of President Mohamed Morsi.
Some protesters have even gone so far as to use hand gestures as language. During the Occupy Wall Street movement, protesters used hand gestures to facilitate collective decision making.
In Hong Kong, however, the crossed arms seem to serve a simpler purpose. "We crossed our arms because we want to express our dissatisfaction toward the government, to reflect our mistrust towards the central Chinese government, and to object to the National People's Congress decision on August 31 [to only allow Beijing-approved candidates in an upcoming election]," student leader Joshua Wong later told CNN.
http://www.washingtonpost.com/blogs/worldviews/wp/2014/10/02/hong-kongs-crossed-arms-and-other-hand-gestures-of-defiance-around-the-world/

Adam Taylor writes about foreign affairs for The Washington Post. Originally from London, he studied at the University of Manchester and Columbia University.
Posted by Mary at 8:30 AM