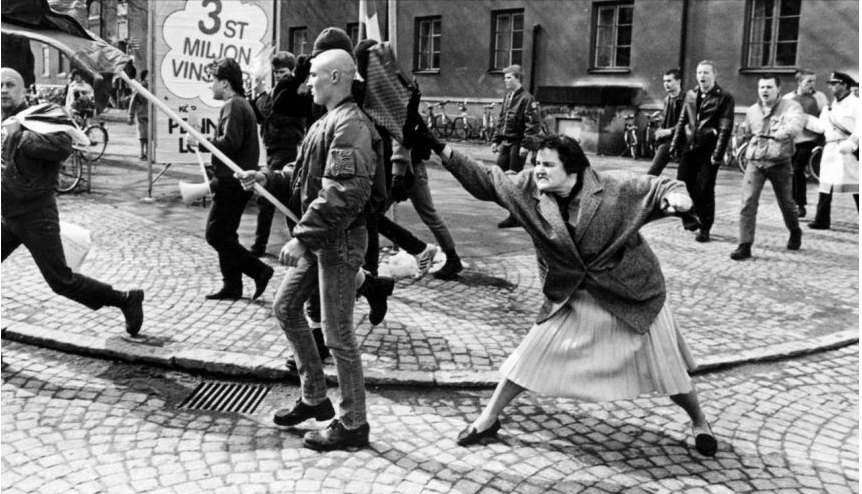 Kvinnan med handväskan
1985 by Hans Runesson
The moment before a woman hits a marching nazi-skinhead with a handbag. The photograph was taken during a demonstration of the Nordic Reich Party supporters. 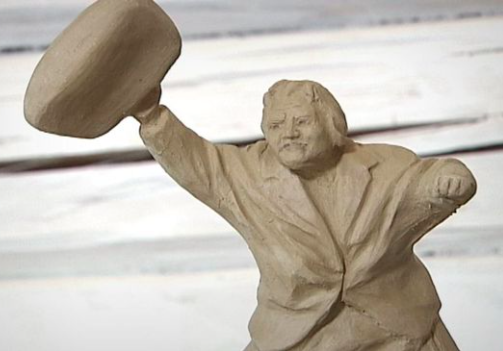 The Swedish sculptor Susanna Arwin made a miniature statue based on the photograph and was to
erect a life-size bronze version in the city of Växjö (2014).  This has been blocked saying that it promotes violence.

The debate is ongoing and can be followed in the Swedish news.d

Town Says “No” To Statue Of Swedish Woman Who Smacked A Nazi With Her Purse, But…

Share on FacebookClick me! Share on TwitterClick me! Copy Link
It was the smack seen ‘round the world.
It’s 1985. Danuta Danielsson, the Polish-Swedish daughter of a Holocaust survivor, steps out into the street during a Neo-Nazi march in the Swedish town of Växjö, and swings her purse directly into the head of a passing skinhead. Photographer Hans Runesson is nearby, and captures the moment in a picture he unambiguously titles “Kvinnan med handväskan”  (“A Woman Hitting a Neo-Nazi With Her Handbag”). The image goes viral and Danielsson becomes something of a folk hero as a result.

image via twitter.com
Flash forward thirty years to today. Danielsson has since passed away, never speaking publically about the incident. But her purse-smacking legacy of standing up to European fascism lives on. It’s understandable, then, that artist Susanna Arwin would want to memorialize this act of ordinary heroism by erecting a bronze statue of Danielsson, purse in hand, near the site of Runesson’s now-iconic photograph. Arwin has even created a small mock-up of her design, which she posted to her Facebook page this past Spring:
The town of Växjö, however, isn’t interested. As Radio Sweden reports, the municipal Culture, Leisure and Recreation Committee last week rejected Arwin’s proposed statue, partially due to an alleged request from a member of Danielsson’s family, but also out of a belief that the installation could somehow be interpreted as supporting violence.
As city councilor Eva Johansson told The Washington Post:

"We in Växjö work for democracy and free speech. Of course, we don't like Nazis. But we can't accept that one can hit a person because one does not like him or her."

Given that we’re talking about the daughter of a Holocaust survivor swatting a Nazi with her purse, Johansson’s non-violent explanation has felt, to many, just a bit thin. In a show of solidarity with Arwin, people across Sweden and beyond have begun hanging purses, handbags, and satchels off various sculptures in their respective cities, blasting the images of their tributes across social media, using the hashtag #tantentillVäxjö:

image via twitter
Following Växjö’s rejection of the proposed statue, The Washington Post points outthat other Swedish communities have offered themselves as homes for the Arwin’s installation. And with purses popping up on sculptures across Europe, it’s clear that Arwin’s tribute to Danielsson has become much more than just a statue: It’s become a movement.
Posted by Mary at 7:24 AM