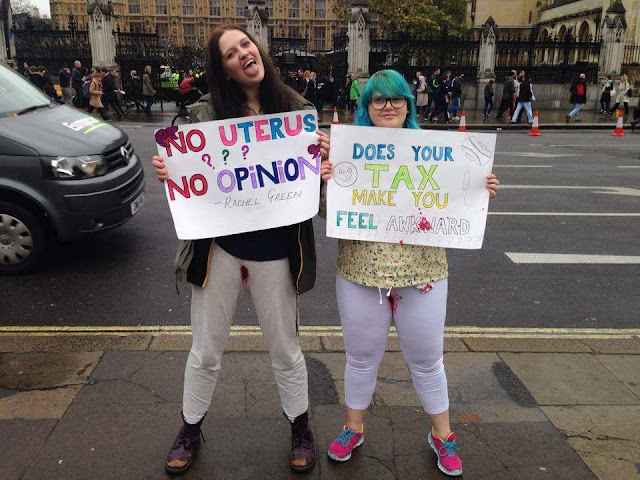 Feminine hygiene products are considered a "luxury item" by the British government.

Three British women took to the streets on Friday Nov. 6 in white pants to make a statement against the EU's tax on feminine hygiene products. And they made sure to leave their tampons at home.
Charlie Edge, 22, led the protest along with two friends. The young women stood outside of the Parliament building in London to protest the government's refusal to classify the sanitary products as a essential items.
According to their Facebook post, the women decided to publicly forgo tampons and pads while on their periods "to show how 'luxury' tampons really are."
Feminine hygiene products are subject to an extra tax in the UK -- meaning that women are charged an additional fee whenever they purchase tampons and maxi pads, on top of the costs incurred by retailers and upped by profit margins.
This is because sanitary products are still considered a "luxury item" by the government, even though other toiletries like razors and incontinence pads are not subject to the same tax.
"We're getting lots of dirty looks and someone just shouted at us to get a job. But everyone keeps saying 'haha omg how quickly would we get free tampons if everyone stopped wearing them?!' So, I'm giving it a go," Edge wrote in her Facebook post.
The extra 30 pence -- nearly 50 cents -- on each box of tampons and pads may not seem like a lot, but research suggests women spend nearly $28,000 on period-related products, with around $2,000 on tampons alone.
The British government won a vote by just 305 to 287 on Monday that prevented the removal of the 5 percent "tampon tax."
Posted by Mary at 11:57 PM