Three graffiti artists hired to add authenticity to refugee camp scenes in this week’s episode of Homeland have said they instead used their artwork to accuse the TV programme of racism.
In the second episode of the fifth season, which aired in the US and Australia earlier this week, and will be shown in the UK on Sunday, lead character Carrie Mathison, played by Claire Danes, can be seen striding past a wall daubed with Arabic script reading: “Homeland is racist.”
Other slogans painted on the walls of the fictional Syrian refugee camp included “Homeland is a joke, and it didn’t make us laugh” and “#blacklivesmatter”, the artists – Heba Amin, Caram Kapp and Stone – said in a statement published online.
The artists said they had been contacted in June by a fellow street artist who had been approached by a production company looking for people to add authenticity to the set – intended to portray a refugee camp on the Syrian-Lebanese border, but filmed on the outskirts of Berlin. 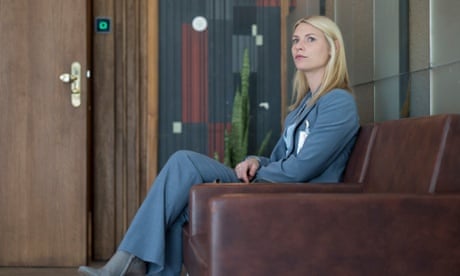 Read more
“Given the series’ reputation,” they wrote, “we were not easily convinced, until we considered what a moment of intervention could relay about our own and many others’ political discontent with the series. It was our moment to make our point by subverting the message using the show itself.”
In an early meeting with the production team, they were, the statement claims, handed images of “pro-Assad graffiti – apparently natural in a Syrian refugee camp”.
The trio decided instead to use the opportunity to air their criticisms of the show, adding graffiti stating: “Homeland is NOT a series”, “The situation is not to be trusted” and “This show does not represent the views of the artists.”
The Arabic script was not checked by producers, they claimed. “The content of what was written on the walls … was of no concern. In their eyes, Arabic script is merely a supplementary visual that completes the horror-fantasy of the Middle East, a poster image dehumanising an entire region to human-less figures in black burkas and moreover, this season, to refugees.”
Amin told the Guardian: “We think the show perpetuates dangerous stereotypes by diminishing an entire region into a farce through the gross misrepresentations that feed into a narrative of political propaganda.
“It is clear they don’t know the region they are attempting to represent. And yet, we suffer the consequences of such shallow and misguided representation.”
Homeland has frequently run into controversy during its five seasons, particularly over its depiction of the Muslim world and its portrayal of an apparently cosy relationship between Al-Qaida and Hezbollah.
After season four depicted Islamabad as a “hellhole”, a Pakistan embassy spokesperson, Nadeem Hotian, said: “Maligning a country that has been a close partner and ally of the US … is a disservice not only to the security interests of the US but also to the people of the US.”

Homeland is brilliant drama. But does it present a crude image of Muslims?

Peter Beaumont, foreign affairs editor
Read more
Showtime has not yet responded to the artists’ claims. The network president, David Nevins, said earlier this year, ahead of the filming of season five, that Homeland would not necessarily continue with Islamist protagonists: “We’re not necessarily going to stay now and forever [focusing on] US relations in the Muslim world … We’re exploring a few different possibilities and may change it up a little bit.”
Nevins added of the show’s writers: “They never shied away from anything difficult. I want them to go right into the teeth of it again.”
Posted by Mary at 2:21 AM